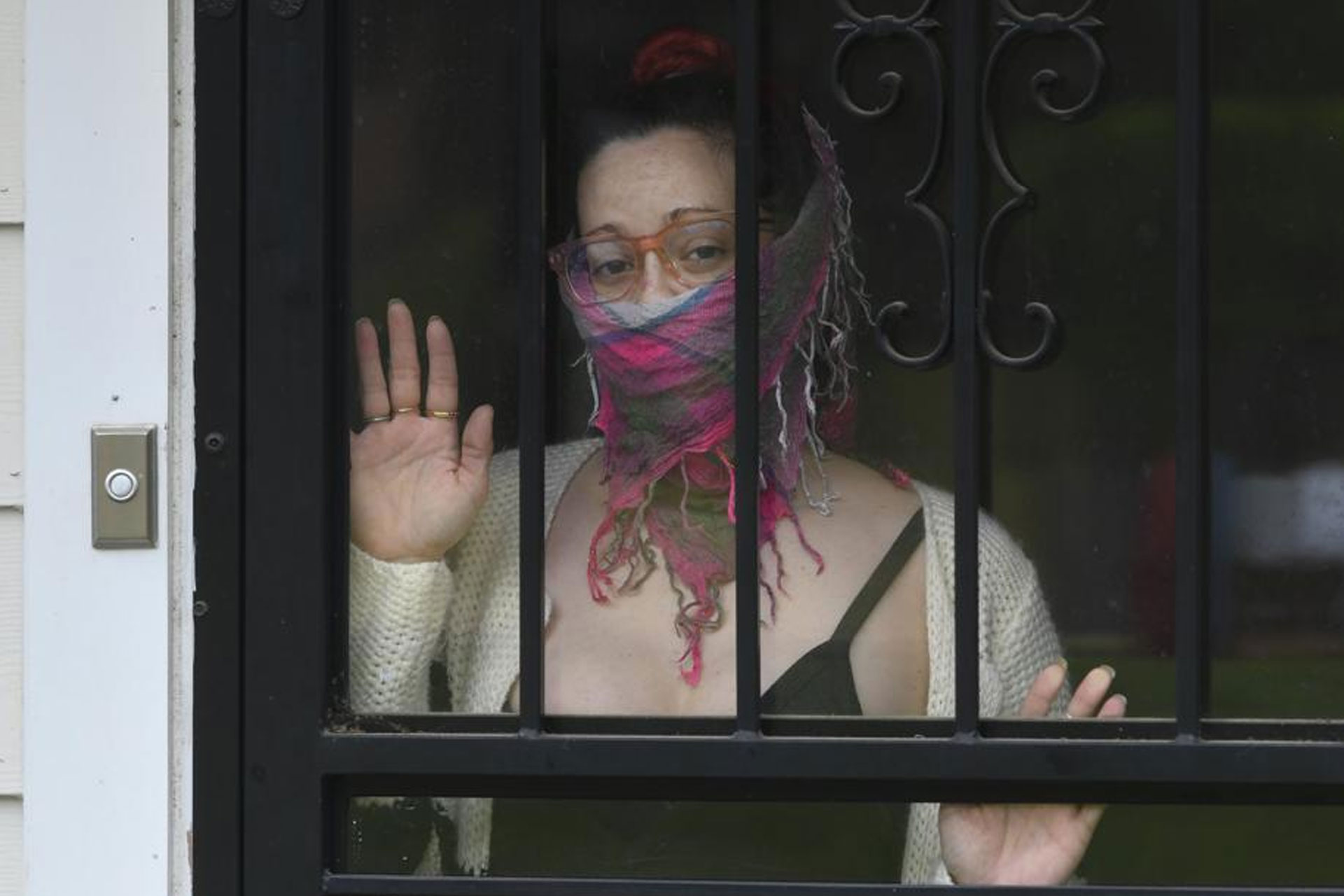 ‘What this highlights is that the system is broken,’ says one lab exec.

These are some of the sick who were tested for coronavirus: a woman who lost consciousness because she could not breathe; a state senator exposed to a congressman under voluntary quarantine; and a mom with a fever who works next to a doctor’s office.

These are some of the sick who were not: a pregnant woman with lupus; a roofer who experienced such severe shortness of breath he dialed 911; and an uninsured woman whom doctors wanted to test, but could not afford it.

By the time Decatur resident Ashley Chupp, 34, came up with the $75 she needed, her doctor had run out of the tests.

Across metro Atlanta, whether a sick person got tested was a matter of circumstance, luck or money, The Atlanta Journal-Constitution found. Those who got tested for COVID-19 were either critically ill, were health care workers potentially exposed, knew health care providers, or had friends and family who could tell them where to go.

On the flip side, independent lab owners told the AJC that they could not get a response or got mixed signals from state or federal officials on how to become COVID-19 test processors or how to allocate their tests or get financial assistance to ramp up their testing.

The nation has found itself in a bind because of a lack of COVID-19 test kits, a run on basic medical supplies like swabs and a shortage of labs approved to analyze specimens. But shifting guidelines on who is eligible for testing has also sown confusion among the public and providers alike, and led to haphazard testing in metro Atlanta.

Gov. Brian Kemp and the state’s top public health and hospital groups have called for a rationing of tests for those most at risk for coronavirus infection, such as older residents, and those on the front lines of the emergency, such medical workers and first responders.

Yet some patients said they received tests when they did not meet these criteria.

Leah Roberts opens up a delivery of COVID-19 samples for testing from a local practice as fellow Molecular Biologist Aubrey Kellison looks on, at Ipsum Diagnostics laboratory on Monday, March 23, 2020. JOHN AMIS /FOR THE AJCPhoto: The Atlanta Journal-Constitution

“The reality of who has easy access to testing and who doesn’t makes clear that we don’t have a health care system, and never have had a health care system, that provides equal access or access based on need,” said Dr. Harry J. Heiman, a clinical associate professor in the Department of Health Policy and Behavioral Sciences at Georgia State University.

As of noon Monday, state and private labs have processed 5,069 test kits, but many hundreds, if not a few thousand samples likely await processing.

State public health districts, clinics and hospitals obtained kits from private suppliers or state and federal governments. A spokeswoman for the state Department of Public Health said Friday the agency initially purchased 500 kits and distributed them evenly among all state’s 18 health districts. Another 250 the state later obtained were apportioned to seven districts with the most confirmed cases.

» RELATED: As hospitals fight to keep up, they tell mild cases not to seek tests

Last week, the spokeswoman said another 5,000 kits provided by the federal government were to be deployed to two federal-state drive-through testing sites in Albany and Cherokee County.

To find out who is and is not getting tested, the AJC used social media crowdsourcing and contacted nonprofits, community members and health care providers who serve the uninsured and low-income residents. The AJC’s sample is likely skewed towards those who have access to the internet and are well enough to speak with a reporter.

“Anybody that wants a test can get a test. That’s what the bottom line is,” President Donald Trump said during his March 6 visit to the Centers for Disease Control and Prevention in Atlanta.

Chupp’s doctor said her cough and shortness of breath qualified her for the test, she said, but the exam cost $130 out of pocket. If she spent an additional $75 for the test, she’d have only $10 in her bank account.

A friend who learned Chupp’s condition was worsening gave her money for testing two days later, but by then her primary care practice had run out of tests. It referred her to the Emory Healthcare triage line, which said it was out of tests, too. Three other health care providers she called were out, and a number she was given for a state-run testing site was disconnected.

A lab worker holds a plate that will hold samples of possible COVID-19 and be put in the machine behind it to be analyzed at Ipsum Diagnostics laboratory on Monday, March 23, 2020. JOHN AMIS /FOR THE AJCPhoto: The Atlanta Journal-Constitution

“I was so close to getting tested,” said Chupp, who is uninsured. “When I think back to it, I was so mad I just didn’t do it.”

Carla Garbett, 36, of Atlanta said she failed to find testing after about 50 calls to health care providers and hotlines. She has an auto-immune disorder, asthma and hypertension, which make her more likely to experience serious complications to COVID-19. She is worried she infected colleagues at her restaurant.

Nationally, cases of high-profile people getting tested for COVID-19 prompted worries that they are getting special treatment. The NBA announced that eight teams were tested for the virus as of Wednesday, while U.S. Sen. Rand Paul of Kentucky showed no symptoms when he tested positive.

To add to the confusion, testing eligibility requirements have shifted based on changing federal guidelines and test availability.

Access to tests at doctors’ offices is unpredictable. Some alert patients on their websites or by phone that they cannot test for the coronavirus and urge those with mild symptoms to self-quarantine or contact emergency services if their symptoms worsen. Other practices acknowledge they have a limited number of tests.

Hospitals are prioritizing the critically ill. Several patients with life-threatening symptoms told the AJC said they were able to get tested.

Megan McMonigle, 28, of Tucker, was so out of breath she could not speak a full sentence. She was tested after she arrived at Emory University Hospital’s emergency room March 13.

“I was kind of surprised I qualified for a test given that I’m not high risk,” McMonigle said. She has no pre-existing conditions, and only sought help at the urging of her mother.

Em Cruz, 31, was coughing and had no fever when she was tested Wednesday, but was concerned because even serious illnesses do not raise her temperature. Colleagues helped her get tested at a concierge medical practice next door.

She tested negative, but is still ill.

“Part of me felt guilty that I was able to get a test by chance. I don’t want to take a test away from someone who needs it,” Cruz said.

Molecular Biologist Leah Roberts gets a delivery of COVID-19 samples from a local practice ready for testing at Ipsum Diagnostics laboratory on Monday, March 23, 2020. JOHN AMIS /FOR THE AJCPhoto: The Atlanta Journal-Constitution

State Sen. Brandon Beach, R-Alpharetta, said he was tested for the coronavirus after telling a doctor at Northside Hospital he’d interacted with U.S. Rep. Doug Collins, who had placed himself into voluntary quarantine but wasn’t showing signs of symptoms.

Beach, who had been prescribed antibiotics days earlier, sought a follow-up exam because he was coughing and had chest pains. His representative Bernie Tokarz, a member of Grady Memorial Hospital Corp.’s board of directors, did not respond before deadline to questions on how Beach qualified for the test and located a provider who could perform it.

A spokeswoman for Kemp said its policy does not give lawmakers testing priority, but the state does assist those who are medical providers.

Area independent labs said they are being inundated with requests and have the capacity to increase testing, but their attempts to get guidance from the public health authorities have failed.

LifeHope Labs in Sandy Springs cobbled together a partnership with Southside Medical Center after it was flooded with test requests from people who were not sick, chief operating officer Tim Allen said. But he needs help creating a system to bill insurance and coordinate with doctors and nurses who can screen patients.

“It’s a shame. We have the ability to go do testing. We have the staff. We could be doubling our production,” Allen said Friday, as he drove 38 tests to an area business with sick employees.

“What this highlights is that the system is broken,” Allen said.

Hani El Shawa, CEO of Alpha Genomix Laboratories in Peachtree Corners, has the machines and the capability to process as many as 5,000 coronavirus tests per day in his currently empty molecular diagnostic lab. He began sending emails and contacting officials nearly three weeks ago, but hasn’t been able to get any traction. BEN@BENGRAY.COM / FOR THE AJCPhoto: The Atlanta Journal-Constitution

Ipsum Diagnostics in Sandy Springs was nimble enough to develop software and techniques designed to give patients quick results, COO Lauren Brick said. But calls to public agencies and elected officials inquiring how Ipsum should deploy its tests to fill the most critical needs gave its leaders few answers.

Hani El Shawa, CEO of Alpha Geonomix Laboratories in Peachtree Corners, applied, but later was told orally by an FDA official that the agency had been overrun with applications and that labs like his didn’t need such a letter.

El Shawa had ordered supplies and started contacting health systems, state and federal agencies and even Native American reservations for processing contracts, with no luck. Then he hit another snag.

“Our supplier told us supplies are being rationed and not being released without documented proof of a state or federal contract,” El Shawa said.

By now, his lab and a partner in California could be processing up to 20,000 test kits per day combined, El Shawa said.

Instead, as hospitals and physician groups shut down elective procedures, his lab has lost business. Alpha Geonomix has had to furlough more than half its 100 or so employees.

“You need all hands on deck in this scenario,” he said.