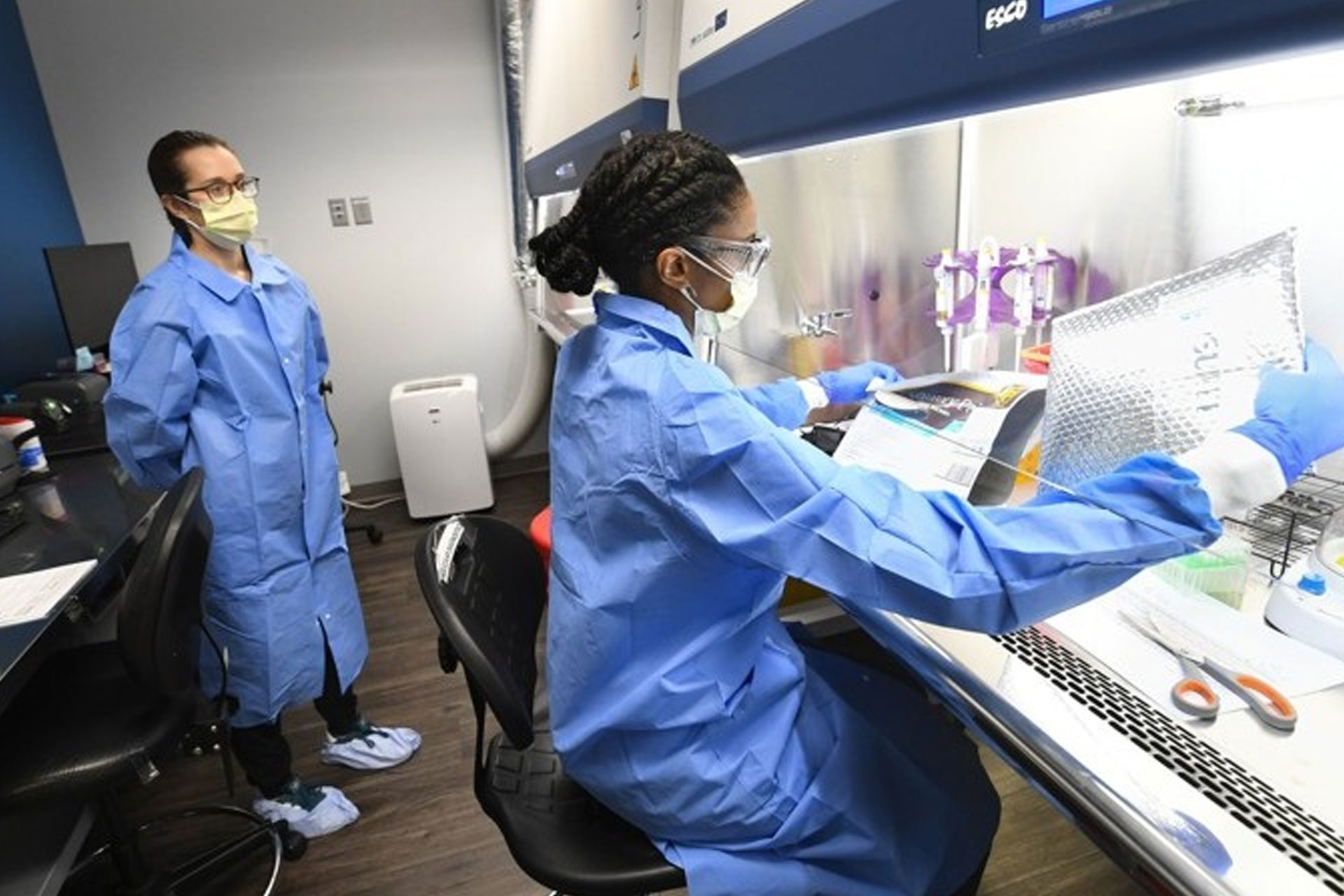 MULTIPLYING THE TEST TO FLATTEN THE PANDEMIC CURVE

When Colin Rogers ’99 was majoring in history and playing football at Furman, having a hand in potentially slowing a pandemic was not in his career plan.

Rogers planned to teach or head to law school, but a move into medical sales ultimately led him to start Ipsum Diagnostics, an Atlanta laboratory he co-founded with Lauren Bricks, a veteran of the laboratory industry. The company is helping the fight against COVID-19 by pioneering a way to quadruple the number of tests per day that can be processed on one instrument.

“We have been doing molecular testing with PCR, which is polymerase chain reaction (extracting DNA from a patient sample to accurately identify the organism or pathogen), for about 16 to 18 months already,” Rogers said. “Of course, we didn’t have COVID-19 on our radar until the beginning of this year.”

Ipsum Diagnostics specializes in molecular pathogen detection. Under normal circumstances, that means the lab focuses on fungal and bacterial DNA panels that identify pathogens so patients can get targeted treatment for conditions like nail fungus, wound infections or urinary tract infections.

But then a pandemic began sweeping across the globe.

“Lauren, my partner, had enough foresight to say we need to get ahead of this – this is coming our way and we’re going to need to be able to do our part to help with this testing,” Rogers said.

That prescient assessment put Ipsum Diagnostics in a race against a virus. The team looked for a way to increase the throughput, or testing capacity, of equipment used by their molecular biologists – and other small labs across the country – every day. With a PCR testing system already in place, they worked to verify the performance of a higher throughput instrument for COVID-19 testing. Typical trays used in testing can hold 96 samples; Ipsum is using a tray that holds 384.

“Nobody else had been able to validate the 384 well plate,” Rogers said. “We did.”

The lab received an emergency use authorization from the FDA.

Ipsum can run 378 patient samples, plus six control samples, at once on the 384-sample tray. The lab is already using the process and expects the number to increase sharply in the coming days as Ipsum begins processing samples for the Georgia Department of Public Health. Georgia has been processing a few hundred tests per day, resulting in a 10- to 12-day testing backlog. Rogers aims to end that.

“We are hoping and planning and preparing ourselves to turn these things around within a day of receiving them,” he said.

Increased testing capacity gets sick patients in isolation, and it can change the course of this crisis for individuals, families and communities. The effort is personal for Rogers.

“One of my friends lost his father,” he said.

Without the availability of a quick test result, that friend had to assume he was carrying the virus, which meant he was separated from his wife and children, as well as his mother while she awaited testing.

“One of the reasons we’re doing this obviously is to help flatten the curve and quell the pandemic,” he said. “But you’ve just lost your loved one and you’ve got to sit alone in a room for 10 days wondering if you’ve got it – that’s just awful.”

This production boost isn’t expected to be a windfall operation for the company. The Medicare reimbursement rate for each test is $51. “We’ve never contracted or charged a dollar more than that amount,” Rogers said.

Beyond that price cap, Rogers said the company is taking a measured approach to the test’s use by working with hospitals, nursing homes and state governments to start, so tests are run on samples from people who have symptoms, have been exposed or have already tested negative for other illnesses, such as influenza.

For Rogers, working for the public good also means sharing what could otherwise be a proprietary process. This is critical in areas where access to testing is limited. A molecular biologist from West Virginia recently trained at Ipsum Diagnostics. “There wasn’t a single lab in West Virginia that was doing COVID-19 testing before that,” Rogers said.

Refusing to charge an inflated rate for testing or charge other labs to license the process is just the right way to do business in such an unprecedented time, according to Rogers.

“We’re not going to change now just to maybe up the potential profitability of this,” he said.

Rogers said his professors, coaches and classmates at Furman reinforced the integrity and work ethic he learned from his parents.

“All of my good friends from there have been the same way,” he said. “They’ve gone about life the right way and done things professionally, successfully and morally right.”